Welcome to the Tansey Photography blog. Here you can keep up to date with all the latest news in our world. 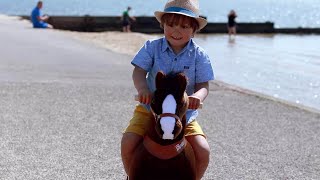 NEW VIDEO Pony cycle, rides like a real pony, but it's kid powered! We took Jason out on his pony and he absolutely loves it. He couldn't have been happier riding this pony round the park and in the house for the last couple weeks, with the biggest smile in his face! Sooo much fun, and a great way to get some exercise! His legs were definitely feeling it after a trip to the beach! Jason's named his little brown pony "Twinkle Toes .... " and he keeps trying to give him some
Posts are coming soon
Stay tuned...

Working with my xplora Smartwatch for kids